Employee of the Month

For a good portion of 2014 and 2015, I was waiting tables at Outback Steakhouse. I was a good-enough server, with the potential to be great if I applied myself. I didn't care about that job, though, so I didn't try hard enough to be great.

Yes, it is tip-based, so it's fiscally responsible to try hard. But, you learn quickly which people will tip well and which won't, and you base your amount of effort off of that. For the amount of work I put in, I made great money.

One of my biggest issues with jobs like that is the corporate mentality of drinking the proverbial Kool-Aid and being part of the team. I would always roll my eyes when a manager would tell me to do something and I knew that they didn't believe it. They weren't a manager of the restaurant; they were a conduit of the corporate puppet masters above them.

I got a lot of compliments for writing the motivational dry-erase board messages to the employees each day. It was supposed to be done by the manager, but he was Egyptian and English was his second language, and he had trouble articulating the points he wanted to make. I was bored one day and started writing all of the buzz words and jargon and whatnot. He was impressed and that became my unofficial added duty. 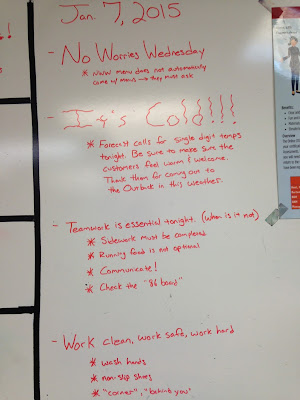 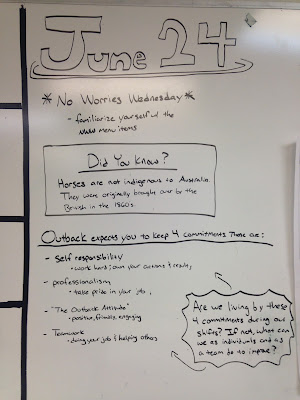 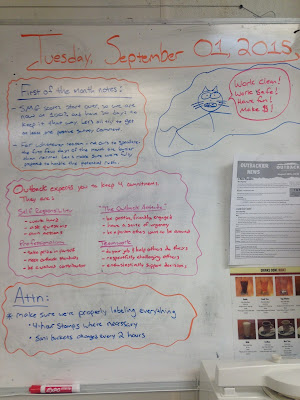 Was I a good employee? Not really. As I mentioned, I did enough to get by. I had my vices and bad stuff I did at work, which we'll get into shortly. But, I really think I was allowed to basically be an employee who goofed off, broke several rules, was consistently late and lazy, for three reasons:

1) I agreed to be the morning opener. Nobody liked coming in early and making less money on the lunch shift. But I did it without complaining.

2) I did little things to show that I was a team player, like the communication board. I knew enough of other jobs to go do them if I needed to. I knew how to make salads and desserts, I knew how to wash dishes, I knew how to do hosting duties. And I would occasionally do all of those.

3) I was personable, fun, and I wasn't a piece of shit. That one is important to get ahead in any aspect of life. For the most part, I think people liked being around me.

We'll get into some of my flaws here in a bit. But, in January of 2015 I realized that Outback was going to start recognizing an "Employee of the Month" award. You got your name on a plaque on the wall, and a gift card of some sort. The January winner was who we expected it to be. "Who's the best employee we've got?" Oh, that guy over there, and he won.

As the months progressed and he didn't consistently win it each month, I wondered what the criteria was for the award. I'd think to myself, "Really? Is that the best one?"

I began asking around about the July employee of the month. I asked the GM who he voted for. He told me he had been on vacation for two weeks and didn't vote because he wasn't around. I asked two other managers, and they both told me they hadn't voted either. There are only five managers. I came to the conclusion that the whole thing was a charade with one person saying "How about X?" and the others either not caring enough to say anything else, or not even being present.

When July was announced, I jokingly asked the GM why I hadn't been chosen. He thought I was serious and pulled me aside to explain that I was late all the time. It was the first week of August and I hadn't been late once. I told him that and he said "Yes, you're doing very good this month." I told him I was going to be employee of the month for August.

I cut back on my shenanigans and worked hard. I wanted to prove a point. I wanted to see if the voting was legitimate. I paid attention to what other employees were doing, so that way I could judge their performances against mine. I worked more night shifts that month, since they needed an employee to count money and do computer work at the end of the night. A few refused and they didn't trust others. So I was recruited to do it.

At the end of the month, I wrote down everything that I thought warranted one to become employee of the month. 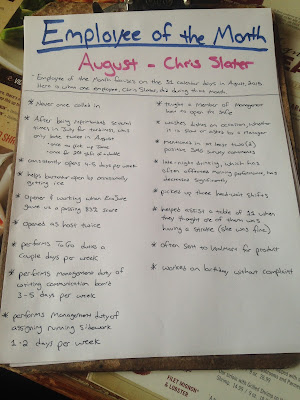 There's the picture. And here's what I wrote:

- Employee of the month focuses on the 31 calendar days in August 2015. Here is what one employee, Chris Slater, did during that month.

- Never once called in.

- After being reprimanded several times in July for tardiness,  was only late twice in August: once to pick up Jamie, once for 2nd shift of a double

- Opener & worker when EcoSure gave us a passing 83% score.

- Performs management duty of writing communication board 3-5 days per week.

- Taught a member of management how to open the safe.

- Washes dishes on occasion, whether it is slow or asked by a manager.

- Helped assist a table of 11 when they thought one of them was having a stroke (she was fine).

- Often sent to Walmart for product.

- Worked on birthday without complaint.

And that's what I did in August. Some of it isn't that extraordinary. But, I think the important thing was that the health inspector showed up while I was the opening server. He inspected what I did and determined that we were safe. I was told by the GM that he wanted me there when the health inspector came, because he trusted me to do everything right.

I showed the list to two managers. They both laughed and signed it, thereby giving me their vote. The list was left in the office. I asked another manager about it shortly thereafter. He told me that some of the items were a joke, but that he also voted for me. Three of five managers told me that they voted for me.

One day in early September, we were all called together in the middle of a shift for the announcement. Several employees were looking at me, because they knew about my crusade. Another guy was announced. I jokingly put my middle finger in the air, said "Fuck this shit" and walked off. The August employee of the month was a "no call, no show" less than a week later.

Why didn't I become the August employee of the month? Two reasons:

1) The whole concept is a joke, designed to promote a false sense of pride and internal competition to see who can be the "best."

Not in a "I can't make it through my shift without a drink" kind of way, but in a "This job is mentally uninspiring and it's so unfulfilling, I'm gonna go sneak out to my car and catch a buzz" kind of way.

The same way that a majority of employees there would smoke pot before or during their shifts. And, also the same way that - depending on the day - a minority or majority of employees would drink before or during their shifts. Yeah, I was the "face" of Outback Boozing, but that was because I didn't care. A lot of people did it.

Those were the couple of exceptions that a few would never let me forget. And that became my reputation. And I didn't care to fight it or correct them. I've learned now that if you have a job that you enjoy and mentally stimulates you, that you tend to drink less and for the proper reasons.

And that was part of my mentality behind the employee of the month thing. I can do all of those "good" things while having that reputation as a bad employee.

And that's my tale of how I spent August of 2015 testing if there was really system in place for employee of the month at Outback Steakhouse. My conclusion: there wasn't.
Posted by Chris Slater at 9:39 PM